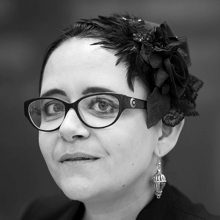 Katarína holds a master’s degree in Film and Television Production & Management from the Academy of Performing Arts in Bratislava. After over a decade of fundraising experience gained primarily at Greenpeace Central and Eastern Europe, and at various local Slovak NGOs, she co-established the Slovak Fundraising Centre in 2009 and has been its Deputy Chair since then.

In 2016 she joined the leading European advocacy organisation defending human rights and freedoms in the digital environment –  the European Digital Rights/EDRi – based in Brussels (BE), as a Senior Fundraising Manager. As well as working for EDRi, she continues to provide fundraising consultancy to NGOs which hold a special spot in her fundraising heart, such as the European Remembrance organisation Post Bellum SK, and the LGBT+ organisation Saplinq. She also conducts fundraising trainings in Slovakia and abroad, and co-organises fundraising conferences and workshops together with her colleague and lifelong friend Eduard Marček.

In spring 2022, together with Katalin, they designed and conducted their first intense corporate fundraising training for Lithuanian fundraisers and Aukok.lt in Vilnius, which later became the idea of this masterclass, which will be part of the CEE Fundraising Conference 2022.